The McClintock family emigrated from Argyll in Scotland, arriving in County Donegal in the late 1500’s early 1600’s before moving to Seskinore in 1845. They built the school, church, Orange hall and provided employment for the local population so the village has historically had a rich Ulster-Scots heritage.

The school’s Parent Support Group applied to the Ulster-Scots Agency for funding to introduce Highland Dance for the young people of the locality.  Since starting in January 2011 this energetic form of dance has been a resounding success with an average attendance of over 25 aged between 4 to 14 years old.  The participants come from a wide range of local and not so local primary/post-primary schools, encompassing the controlled, maintained and integrated education sectors.

The McClintock Highland Dancers under the watchful eye of current tutor, Victoria McCormack have performed at numerous public functions and in the past travelled to Scotland showcasing their talent.  They are regularly asked to perform at Burns Night celebrations, church functions, loyal order demonstrations, cultural events and in 2019 led the Black Saturday celebration held in Seskinore.

An Ulster-Scots After-School club began way back in 2009 to give pupils a wide sample of nine aspects of culture/heritage including storytelling, language, drum majoring and history. This was well attended and whetted the appetite for more!

Ulster-Scots Agency tutor Keith Lyttle introduced the fiddle to the school in 2010 for three years.  From 2014 P4-7 children have been tutored by Barney Megoran, Victoria Catterson and Mark Carmichael in drumming, chanter, drum majoring and the tin whistle.

Pupils have hugely benefitted from this musical input and the school were proud to be awarded the Ulster-Scots Award for Music in 2015. Pupils regularly receiving Foundation Certificates in Music and in the past have went to Stormont to collect their awards.

Since 2017 the school worked towards the Ulster-Scots Schools Flagship Award.  This was eventually achieved in 2019. Pupils were immersed in a variety of Ulster-Scots heritage including language, Scottish country dance, playing the Lambeg drums and drama.  Key Stage 2 pupils had lots of fun performing for parents in Ulster-Scots, namely Dan Gordon’s Belfast Blitz drama. Under the tutelage of Mark Carmichael the tin whistle has now been brought into a whole class setting from P5 upwards.  Even the global Covid pandemic in 2020 couldn’t stop the tuition, with Mr  Carmichael remotely teaching pupils through the Zoom video platform!

The teaching staff at McClintock have actively embedded Ulster-Scots into the curriculum and it has dovetailed seamlessly into the areas of World Around Us, Literacy, the Arts and Music, enriching the pupils learning.

We are indebted to the generous funding from the Ulster-Scots Agency and other external funding bodies. 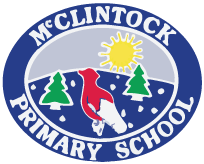